Like all columbines, the Western red columbine (Aquilegia formosa) above has a five-petalled flower with unusual “spurs” or tubules on the top. Each spur is formed by one of the five petals, curling into a cylinder as it rises. 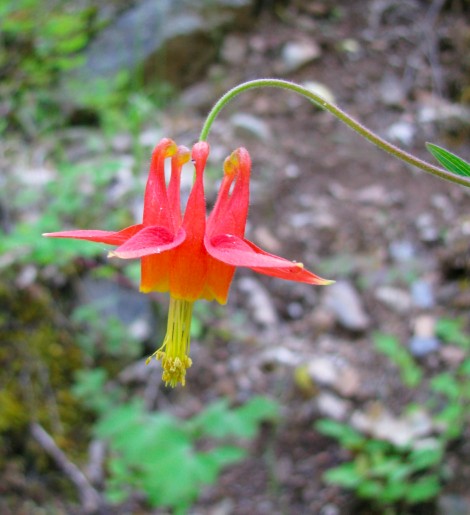 The lower ends of the petals join into a circle, within which are the yellow, pollen-bearing, stamens which extend beyond the petals. [Diagram below from USFS.]

The sepals (that wrap the immature flower) are not green as in most flowers but red, and extend out at right angles when the flower opens.

Flower design is all about getting pollen from the stamens to the pistils (female organs); form definitely follows function.What, then, has led to the development of these seemingly superfluous spurs? One clue is that they are of widely varying lengths. North American columbines range in spur length from from 7.5 to 123 mm (0.35 to 4.8 in.). And, because the first columbine—bearing a flower with short spurs— reached North America via the Bering Strait land bridge, between 10,000 and 40,000 years ago, all this change has taken place in a relatively short time, indicating some big payoff for the plant, in terms of survival or reproduction.

The columbine has both male and female parts in each flower, allowing for self-pollination, but that would not introduce any genetic variation. So the flower of the columbine is an elaborate package which has evolved to get effective pollination from its principal pollinators: bees, hummingbirds, and hawkmoths. And the spurs are an integral part of the process… 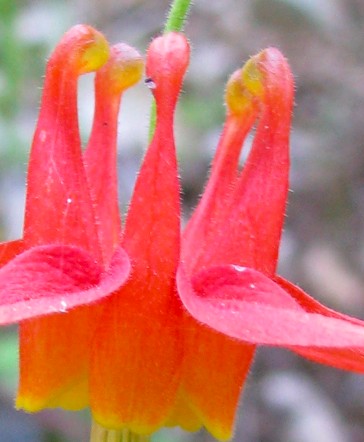 because the knob at the end of each spur contains nectar, and that is a big attraction to pollinators.

The flowers and pollinators have conflicting interests: the visitor just wants the nectar, as much as it can drink, while the flower wants to dole out the nectar bit by bit in order to keep attracting more insects (or other pollinators—bats, birds). One method is by placing the nectar at the end of a passage just barely long enough for the tongue of the pollinators. They can sip but not slurp, and while forcing their way in they make good contact with the pistils and stamens to pick up and deposit pollen.

Darwin was intrigued by an extreme example, a Malagasy orchid which puts its nectar at the end of a 30 cm (11.8 in.) tube, and he hypothesized that flowers and their pollinators evolved together gradually in this regard. The flowers raised the bar, so to speak, a little at a time by lengthening the reach for the nectar, and the pollinating insects gradually evolved longer and longer tongues. In columbines, there are some species with short spurs accessible to bees, others with longer spurs that are mainly pollinated by hummingbirds, and some with even longer spurs for the long-tongued hawkmoth. 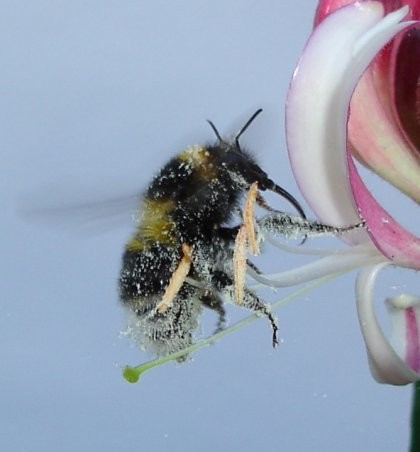 Bee approaching flower, with tongue out. The long tan objects are pollen-bearing anthers, on the ends of the stamens. Photo.

Above is the flower of Aquilegia longissima (the longspur columbine of the SW US), which has the longest spurs of any species of columbine. Compare to those on the previous photos of our Western red columbine. The Western red is pollinated primarily by hummingbirds, though it attracts other insects too including bees and butterflies.

In a complex genetic study of North American columbine species published in 2007 (1), Whittall and Hodges found evidence that the ancestral short-spurred columbines had been bee-pollinated, but as they moved south and encountered first hummingbirds, then hawkmoths, had undergone two relatively quick transitions of lengthening spurs to adapt to these new pollinators.When long-tongued pollinators get nectar from a short-spurred flower, they will not need to shoulder their way in, and so won’t contact the stamens and pistils as much. They won’t pick up, or deposit, as much pollen.

And this led to development of different species of columbine. Once flowers in a certain area have gotten longer spurs, so that they mostly depend on a new longer-tongued pollinator, flowers that attract that particular organism better will be more successfully pollinated and produce more seeds. This may mean a change in color, flower orientation (facing up or down), or changes in form. Hodges subsequently studied color preference in the pollinators of columbines:

”What is important in this research is that hawkmoths mostly visit— and pollinate — white or pale flowers,” said senior author Scott A. Hodges, professor of ecology, evolution and marine biology at UCSB. “We have shown experimentally that hawkmoths prefer these paler colors.” When a plant population shifts from being predominantly hummingbird-pollinated where flowers are red, to hawkmoth-pollinated, natural selection works to change the flower color to white or yellow, he explained. [full original article here(2)] 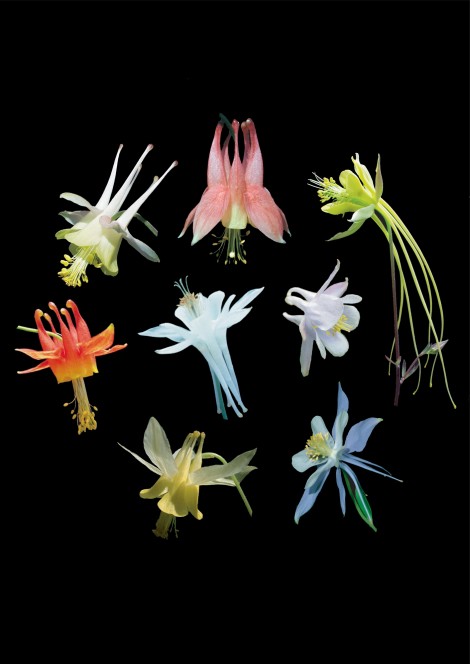 This can even be seen in varieties of the same species, as in the case of Aquilegia coerulea, the Colorado blue columbine. Each of the three below is, according to the USDA, the same variety: A. coerulea James. 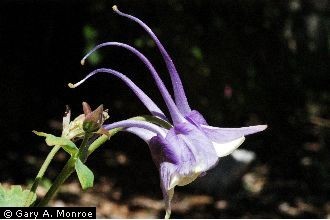 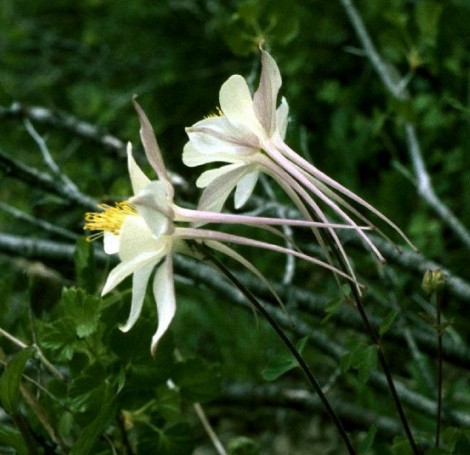 Here’s the process by which the flowers get lighter in color, as the latitude changes.

In this theoretically orderly process whereby bees are excluded from the nectar supplies of long-spurred flowers, it happens that the bees sometimes choose to solve the problem in a “cutting the Gordian knot” fashion, by making holes in the spurs to drink the nectar directly. Unlike a bee who blunders around in the flower and departs with no nectar, the spur-cutting bee contributes nothing to pollination. But bees require both nectar and pollen, and the columbine’s pistils and stamens are easy to reach; so the bee who stops for a quick cheating drink may look in for pollen another time, thus fulfilling the needs of the flower as well as her own. (In honeybees the workers are all females.)

So it seems that Darwin’s idea of a gradual process, with increases in spur length being answered by longer tongues on the pollinator species, is not correct for columbines at least. Based on genetic data, Whittall and Hodges hypothesize a start-and-stop process: the columbines moved into new areas, with new longer-tongued pollinators (e.g. hummingbirds) which could raid the nectar without touching the pollen, and so flowers with longer nectar spurs became more likely to be pollinated and set seed. Instead of the flowers leading the dance by lengthening the spurs, it was the presence of different pollinators that forced change.

But Darwin was proved right in his prediction that an insect would turn up, capable of pollinating the incredibly long-tubed orchid. It’s a hawkmoth called Xanthopan morgani, or Morgan’s Sphinx, and here is its picture.

More images of these remarkable moths: night-time photo of Arizona moth feeding on Jimsonweed, showing tongue curled up in the air; pictures of the rare British hummingbird hawk-moth, which can hover: A, B; and photos of the African convolvulus hawkmoth.

1 thought on “Form and function: a columbine flower”