Our roadside botanizing was especially exciting today. First perhaps I should explain why we walk along forest service roads instead of hiking along trails. It has a lot to do with a single plant, although not one I would describe as a widlflower.

Yes, it’s poison oak (Toxicodendron diversilobum), seen above early in the spring before it has reached its full diabolical potential of thickets six feet tall, stretching branches out onto trails in search of sunshine in order to grow even more monstrously large. Poison oak could be an interesting plant: it occurs in various forms from semi-vines threading up tree trunks, to a low-growing ankle-ambusher, as well as the aforementioned woody thickets. But all parts contain a chemical that is—not poisonous—but an extremely powerful allergen, an oil called urushiol. Most people are allergic to it, and I am very very allergic, so once we get off of bare ground I spend most of my time looking down and around before every step in order to find it before it finds me. (Be warned: allergies can come and go, so a history of immunity doesn’t mean you’ll always be immune.)

Happily, there’s an abundance of things to see by walking along the road and making a few careful excursions. Today was a bonanza.

There’s an audio recording of Lew Welch reading this, here.

I don’t think we saw anything that “nobody’s ever really seen”, although one must pay careful attention to Lew Welch’s language, that “really seen” part. But what we saw was marvelous. Here’s one sight: 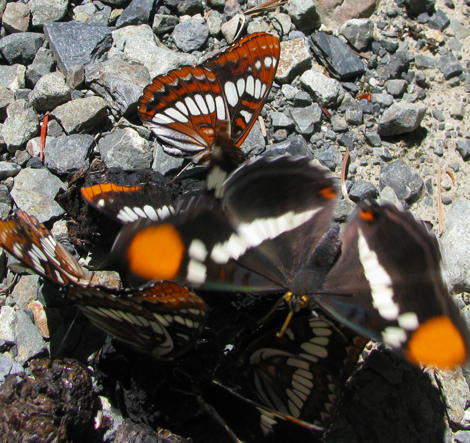 From a distance I thought the butterflies were gathered upon a damp patch improbably located in the middle of the hot dusty gravel road. In other such situations, I haven’t been able to approach very closely without scaring them off. I took some pictures, then moved a bit closer, closer still, and in the end I was kneeling right beside them without really disturbing them at all. And then I could see what it was that they were so attracted to. 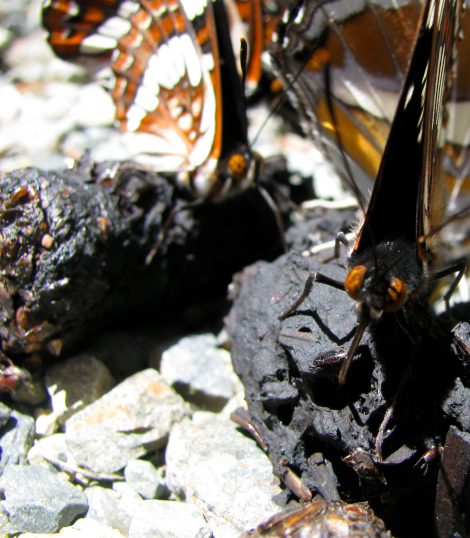 They were on the scat of some animal, not an uncommon territorial marker to find in the middle of these forest roads. Could be fox, raccoon, coyote. Undigested material including seeds and some woody bits (pine needles?) can be seen, and the scat is pretty dry. Unlikely to be a source of moisture. However, butterflies require minerals not found in nectar, and often get these by drinking from damp soil or applying their tongues to scat. I am curious how they get nutrients from dry materials, because their tongues are hollow tubes designed for drinking liquids.

I poured some water on a nearby area before we left in search of lilies. When we came back, all the butterflies were still on the scat.

There were two species there. One was Adelpha bredowii, California sister, shown here exploring my arm. Some photos (here, for example) show this species with blue rather than grey markings, but that may be local variation.

What’s the “sister” about? It’s said to refer to the black and white markings (like a nun’s habit) on the other side of the wings, the dorsal side (looking down on the outspread wings and the insect’s back, from above).

The other is Limenitis lorquinii, Lorquin’s admiral. There are several different butterfly species with “admiral” in their names, and the reference is not clear. Some say the names were originally “admirable” but I can find no support, just speculation. Lorquin was a Frenchman in California during the Gold Rush of 1850, who sent butterfly specimens back to France where they were described for the first time by eminent lepidopterist Jean Baptiste Alphonse Dechauffour de Boisduval. 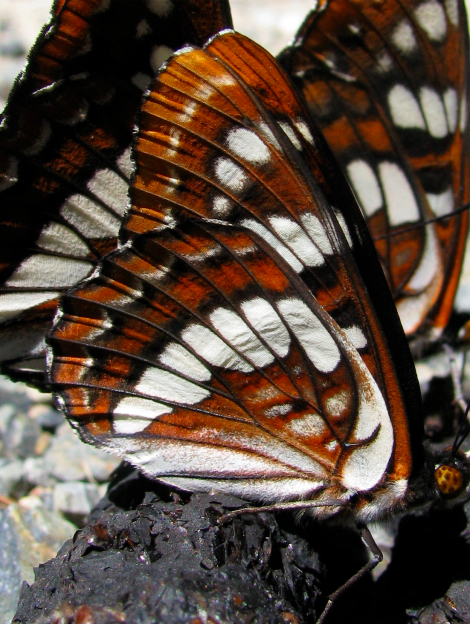 It is unbelievable to see these creatures in such detail. First, Limenitis lorquini.

It is possible to see the wing-veins as the three-dimensional structures that they are. When we read that a new butterfly emerging from the chrysalis has to “pump up” its folded wrinkled wings, before they are strong enough to fly, these veins are the means. “The butterfly has to expand and dry [its wings] as soon as it emerges from the chrysalis. To do this, it uses its body as a pump and forces fluid through a series of tube-like veins. It’s a little like inflating a balloon — as the veins fill with fluid, they slowly stretch the surface of the wings.” Source. 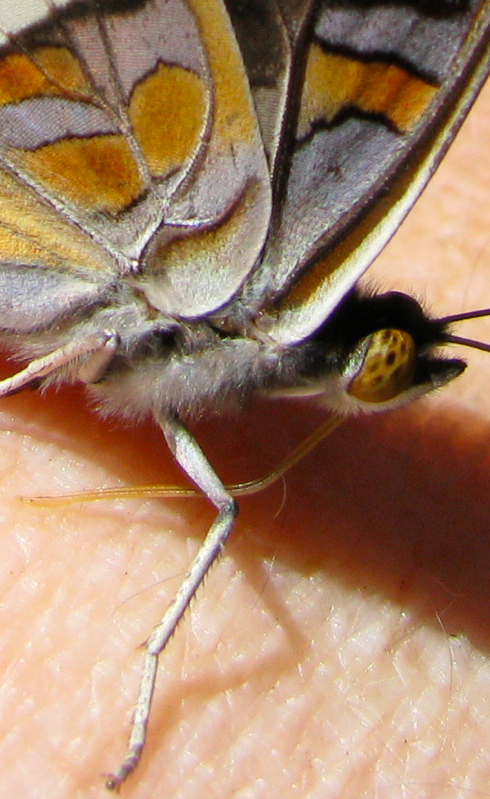 Adelpha bredowii, trailing its long tongue over my skin.

We went on to look at the Washington lilies described in my previous post. The blooms that were white and pink on June 24th, 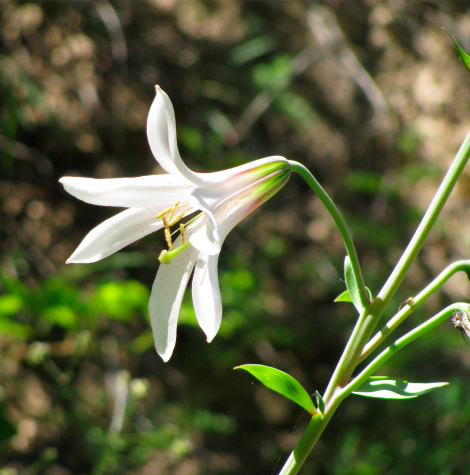 But another plant was in spectacular bloom. 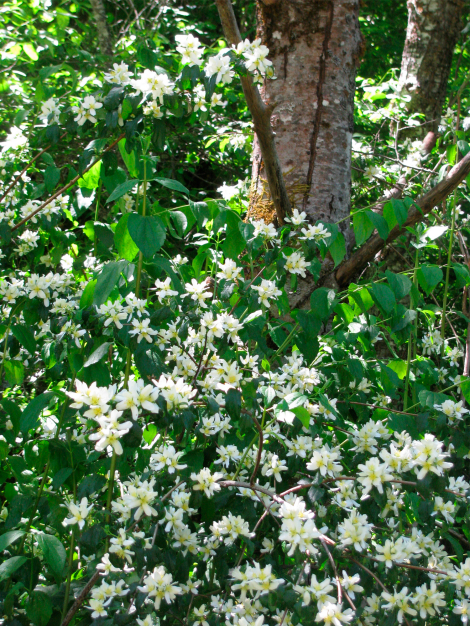 This is Philadelphus lewisii, commonly called mock orange for its fragrance. To me there was nothing citrus-y about the fragrance, but I’ve never smelled orange trees in bloom. (There are perhaps a dozen other plants also called mock orange, illustrating how treacherous common names can be.) Philadelphus lewisii is one of nearly 200 plants new to science which Lewis and Clark described. Indians used its straight stems in making arrows. 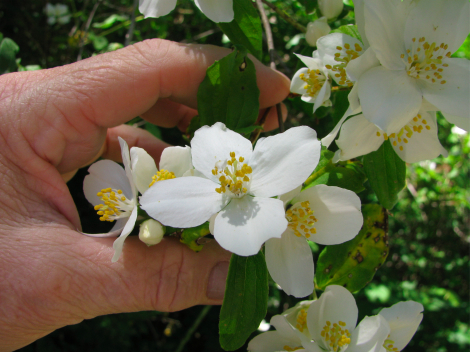 On the drive back to the main road we saw many more, all in synchrony of bloom. It’s a shrub that can reach 12 feet, so it offers a lot of flowers! We had remarked earlier on how many butterflies were about, in the air: monarchs, tiger swallowtails, and others. Surely the Philadelphus extravaganza had something to do with the sudden abundance of butterflies, and we speculated on how insects and plants keep in step when the music of the dance—the temperature, rainfall, sunny or cloudy skies—can vary so drastically year to year. This long rainy spring was very atypical, yet after three sunny days here are the partners right in step.

Another unusual find will have to wait for my next post. It has something to do with this wild rose…