We walked along a dirt road above the Applegate River. Warm and dusty, with the cool green river below. On the far side of the river there are houses, and tied up below one was a gas-powered dredge for sucking up sand and silt from the bottom or edges of the river, in search of gold. Any gold around here is powder or very small pieces; nothing you would think of as a nugget is likely to be found. Since the moratorium on dredging in the rivers of California more dredgers are mucking up our rivers.

The first wildflower we saw was the rather spectacular Blazing Star (Mentzelia laevicaulis).

This plant likes dry gravelly roadcuts such as this one, and is found from British Columbia south through much of the West. Accounts say the flower is fragrant but we didn’t notice that.

The buds are a pale dawn yellow. Or the color dawns should be. 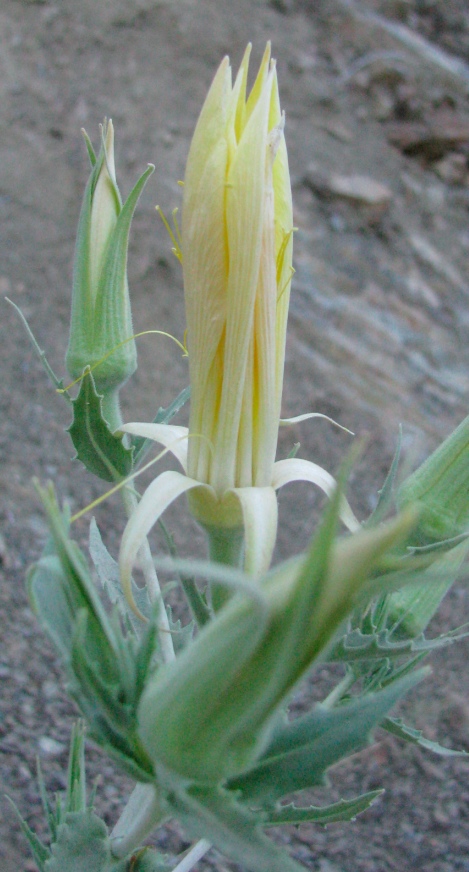 The leaves are distinctive: hairy and scalloped.

“Mentzelia was named by Linnaeus in honour of Christian Mentzel (1622-1701), a German physician, botanist and lexicographer. The epithet laevicaulis (laevi = smooth + caulis = stalk) refers to the comparatively smooth stems of this species in comparison to other Mentzelia species.” For this information on etymology, often impossible to find, I am indebted to the University of British Columbia’s Botany Photo of the Day site.

The flower is somewhat similar to one we saw back in mid-June, Yellow or Western Salsify (Tragopogon dubius), below. But Yellow Salsify is introduced, not native, and regarded as invasive in many areas. The root is “edible raw (slightly bitter, celery-like taste with a hint of cucumber) and cooked (smells like parsnips). The plant exudes a milky latex when cut.” Another species, T. porrifolius, has been known since Roman times for its edible roots and young shoots, and even cultivated. Europeans who introduced T. porrifolius to North America too, where it’s considered an “agricultural weed”, not quite as bad as “invasive”.

The Yellow Salsify leaf is narrow, not scalloped, and smooth rather than hairy.

Large patches of Rabbit-Foot Clover (Trifolium arvense) lined the road. This is another European introduction.

We were too late to see any with fresh blooms, so here they are from A Photo Flora of the Devon and Cornwall Peninsula.

Among the patches of Rabbit-foot Clover there were many spiderweb constructions like this one, a foot wide or more, 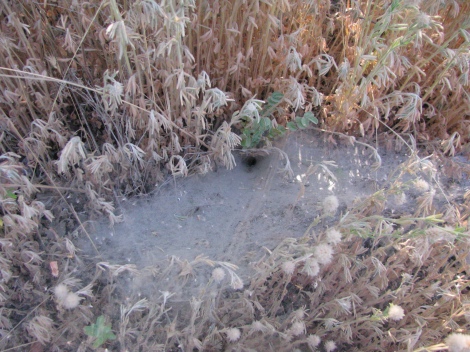 consisting of layers of horizontal web and a funnel at the back where the spider awaits. While we did not see the spiders, the webs are said to be characteristic of species in the genus Agelenopsis, which are called Grass Spiders or Funnel Weavers. They’ve recently been found to be venomous, with a toxin that affects substances involved in muscle movement in insects and in mammals, though humans would seem to have little to worry about unless walking barelegged through the webs and stirring up the spiders. However, the toxins might have medicinal potential (anti-seizure medication). There are good photos of the spiders here along with information at bugguide.net.

Here are the yellow blooms of what we are sure is some species of Eriogonum, which includes plants often known by some variation of the common name “Wild Buckwheat” (although they have nothing to do with the crop plant that provides buckwheat flour).

The flowers were borne on leafless thick reddish stems.

We tried to figure out which Eriogonum this was, but were having no success. Finally we came across this remark about another unidentified Buckwheat,

This plant has frustrated me for years — it is so very common here but I’ve yet to find a picture or a description in any of my layman’s field manuals. However, my favorite A Field Guide to the Plants of Arizona by Anne Orth Epple, did have this to say: almost all species of eriogonum are difficult to identify, even for the expert botanist. For the amateur, simply recognizing wild buckwheat as such is an accomplishment. So there! Epple says that there are 53 species of eriogonum in Arizona.

Okay, we’ll rest on our laurels of having tagged it as a Buckwheat! The author above goes on to say of her plant, “As the season wears on, the flowers gradually turn a brilliant rust color”, and that seems to be true of ours as well, perhaps another Eriogonum characteristic.

One final plant turned out to be another clover.

Pretty and delicate looking, but another European introduction, for cattle forage, which has turned out to be invasive.

And by then Jack the mastiff thought it was time to call it quits, even though he’d been down to the river for a drink.

He drank from his water dish back at the car, and then supervised while we drove home.