Until I read an article in Scientific Mind this month about daydreaming (“Living in a Dream World” by Josie Glausiusz; not available for free as far as I can find), I wasn’t aware that I lack this mental activity. Definitions vary; one used in the article is that daydreams are “an inner world where we can rehearse the future and imagine new adventures without risk“. Another is “imagining situations in the future that are largely positive in tone”. I would add something to differentiate daydreaming from planning—perhaps that daydreaming includes emotional reactions.

It’s not clear in the article whether research results apply only to positive fictional imaginings or to routine planning and review, as well. The latter is much more common. Also the author conflates daydreaming and the mind’s use of off-task time to solve problems non-consciously.

People can daydream in extravagant adventures à la Walter Mitty, or more mundane imaginings of how good that hot bath will feel after work, or how happy one’s child will be when she receives her Christmas present. Most people, the author says, “spend about 30 percent of their waking hours spacing out, drifting off, lost in thought, woolgathering, in a brown study, or building castles in the air.” And it’s important to our sense of self, our creativity, “and how we integrate the outside world into our inner lives”.

I remember, as a solitary child, pretending to be Superman or Tarzan, but not often; I read, instead. After the age of 10 or 12, I don’t think I had imaginary adventures at all. Not surprisingly, I’m also unable to visualize scenes: “Imagine yourself on a tropical beach” is impossible for me to do. I can think, okay, I’m on a tropical breach, it is warm and sunny, and so on, but there’s no sensory aspect to it, just words. Similarly, my memories of the past (mostly gone now due to fibromyalgia cognitive damage) are all just words, as if someone had described a scene to me rather than my having experienced it. There’s no “mind’s eye” in my mind. In novels I usually tune out while reading the descriptions of landscapes and people; no corresponding mental pictures rise in my mind.

Daydreaming can be escapism but it can also be a way of trying out different futures, and experiencing the associated emotions. I think this could also help motivate a person toward a chosen or hoped-for future, by allowing advance tastes of its rewards or of the misery of its alternative. I make decisions about future choices and I make plans but I don’t try them out mentally in advance, and I also (in jobs, for example) tend to stay where I am rather than striving for something different. I’ve thought of myself as lacking in ambition, but maybe it’s more that I don’t have a way of modelling the future choices with emotional content. Mostly I’ve stayed in jobs until they became intolerable, then moved on, sometimes with no replacement in mind. I can’t even really visualize ideas for a vacation or a trip, especially to someplace I’ve never been.

So, what do I do with that 30% of my waking hours that other people use for daydreaming? Not enough. Sometimes, for a couple of minutes, it seems nothing is going on in my mind, or merely observation, without commentary, of what’s happening around me; I have no idea how typical that is. But mostly the engine’s running, chewing over what’s in front of it. Why are things this way, how could this activity be done better, how does this work, that sort of thing. I used to do a lot of sequential thinking, as if working through thoughts with pen and paper, exploring ideas and putting things together, taking them apart, finding correlations and causes. I could continue working on different mental projects during intervals across days and days, and sometimes wrote that way—at the end of the mental work I’d have an outline and some exact wording to put down on paper. Then I’d revise and expand, but I could work out a lot of it mentally and recall it. No more, since fibromyalgia. Thinking is often slow and I can’t remember from one day to the next what I came up with. Sometimes thoughts flit through and are gone before I can even try to remember them. This is one of FM’s major losses, for me, both a loss of pleasure and a loss of what I can accomplish.

Maybe reading fills the role of daydreaming for me. I read a lot, about equal amounts fiction and non-, and if circumstances prevent me from reading for a couple of days I feel the deprivation. The article mentions non-daydreamers only in passing: “Cognitive psychologists are now also examining how brain disease may impair our ability to meander mentally”. If my impairment is due to a brain disease, it’s one I’ve had since early on.

Others, it turns out, suffer from the opposite disorder, daydreaming that is a compulsion or simply so enjoyable that real life takes a back seat. Some have a second life in an alternate world where continuing characters age just like people in the world the rest of us live in. They may fit this narrative into available mental down-time in their lives, or spend up to 90% of their time “away”.

I find it strange that it took me so long to discover that other people spend a third of their waking hours on a mental activity which I lack entirely. It goes to show how little exchange there is among us humans regarding how we think, how our individual minds work. Humans yo-yo between xenophobia—members of other groups are different, dangerous— and “we’re all really just alike”, but a study of psychological research found “significant psychological and behavioral differences between what the researchers call Western, Educated, Industrialized, Rich and Democratic (WEIRD) societies and their non-WEIRD counterparts across a spectrum of key areas, including visual perception, fairness, spatial and moral reasoning, memory and conformity.“ Maybe in daydreaming as well. But nearly all psychological research is done on WEIRD subjects, for both practical and ethnocentric reasons, so who knows? Same for neuroscience; who’s going to airlift fMRI equipment to the lands of the Yanomamo and then persuade them to lie down with their heads inside?

Still, the article raised in my mind some questions we could look at right here in the post-industrial West. If people were prevented from daydreaming, by some technological device probably not yet invented, how would they feel? (Recalling the familiar ‘fact’ about deprivation of night-time dreaming making people hallucinate, I looked to see if it was true, and apparently not.) What proportion of people don’t have imaginative daydreams, and is this always a sign of brain disease or dysfunction or just a normal mental variation? We characterize one sort of excessive negative daydreaming as “catastrophizing”; what about individuals making deliberate use of negative or positive futures, to influence their behavior? And how can “daydreaming” be more precisely separated out from other mental processes such as planning, brooding, brainstorming, and worrying?

Muse on it all, and see what your daydreaming mind comes up with. 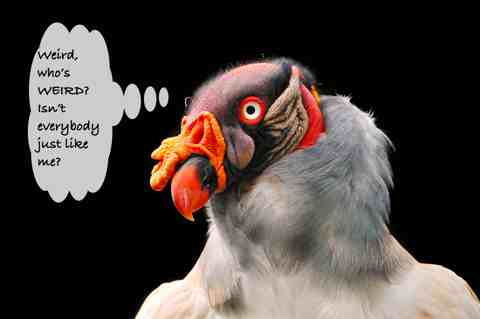 3 thoughts on “Daydreaming—my brain didn’t get that module”