From Information Design Watch comes a link to a graph showing that the number of zombie movies in the US parallels war and social upheavals.

Makes as much sense as anything. Now a media talking head can look at it and conclude that since spikes in zombie movies precede peace or betterment of social upheaval, the zombie movies must be the curative force. “After this, therefore because of this” (post hoc ergo propter hoc) is the only logic the mass media seem to use. 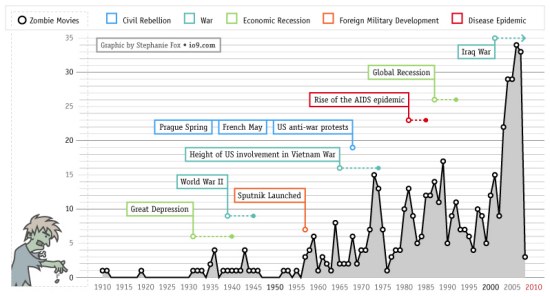 This is much reduced; take a look at the original where you will also find a long list of the movies they used for the chart, going back to a 1910 version of Frankenstein. 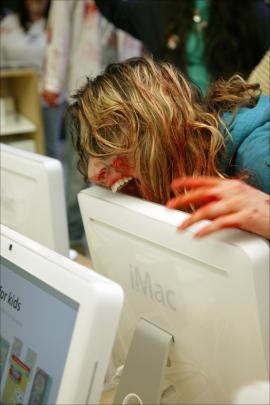 These members of an event called “SF Zombie Mob 2007” got a little confused and evidently tried sucking brains out of iMacs––no gratitude, don’t they remember how Apple freed them in the 1984 Mac commercial? Meanwhile the Apple Store employees jostled for position to take the best photos; other stores had no sense of humor and shut the zombies out, according to the source.